How I became a part of Replit Community

My laptop was 9/yo and very slow, coding on it was a pain. Setting up IDES and text editors was annoying so I decided to search for online text editors and IDES. That's how I found Repl.it and Codepen.io. I primarily do frontend so codepen was easy for me to use. Because of this, I didn’t know much about replit. One day while working on my discord bot I found a join link to the replit discord. I don't know how long the link has been there but, I first saw it on 14 Feb 2020 and joined the repl.it discord server.

My journey in Replit Discord server

The movement I joined and sent my 1st message, I got asked who I was - ? A gamer girl? or a guy with an anime pfp? from Wetyuip. The first people I met on the server were Slip, Haz, Wetyuip and Dotcomboom. I didn’t send much for a while, , until March 8th 2020 - on Women's day. I sent "Happy women's day" in the server which is when I met Edwin :) who was talking about Bryan M. Cantrill It was the first time I had heard of them, and Edwin spoke about them then H (aka Thedrone7) came asked Edwin why he wasn't sleeping. Edwin said that he can't sleep which H replied why not? and Edwin said because he is watching a video I enjoyed talking with both of them and It was likely one of the best days of my life. That day I found two friends, Edwin and H, and I won’t forget it. After that day, I became an active member of the replit discord.

On 14th March 2020, replit announced their 9th codejam, I wasn't sure whether I wanted to participate or not, so I tweeted about that, Amjad Masad replied saying that I was more than talented enough for it. Because of this, I decided that I would participate.

There are people of all different levels. I'm sure you're more than talented enough for it

Then H asked me if I wanted to team up with him, at that time I wasn't sure but I agreed to anyways. Looking back, I think it was probably one of the best things that ever happened to me; I'm glad H asked me and was willing to team up with me. I don't think anyone else would have been as nice and supportive as H was. He asked me which languages I knew I said none. He was fine with that though. To be honest, when I read that, my mouth was open and I was very happy. Originally, there were three members in our team: H, AllAwesome (AA) and I, AA started an internship with replit and ended up becoming a judge so he left, leaving H and I. We worked on our game - I did the design and H did all the coding. I wasn’t sure that my design was good enough but H said it wasn’t meant to be perfect and that I should not worry too much about it. We ended up settling on this. and placed in second. 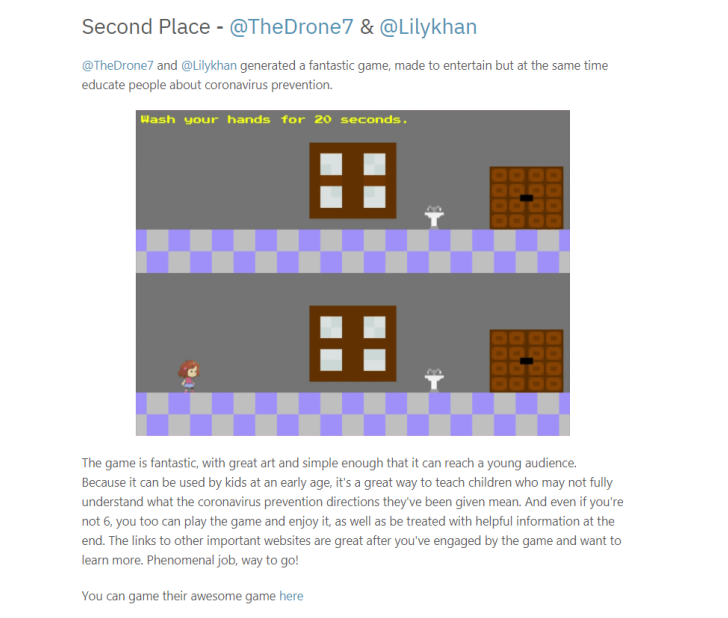 On April 17th Repl.it hosted TemplateJam, which of course I participated in. It was a really fun competition. I created a Portfolio Site Template which I won first place with. :D 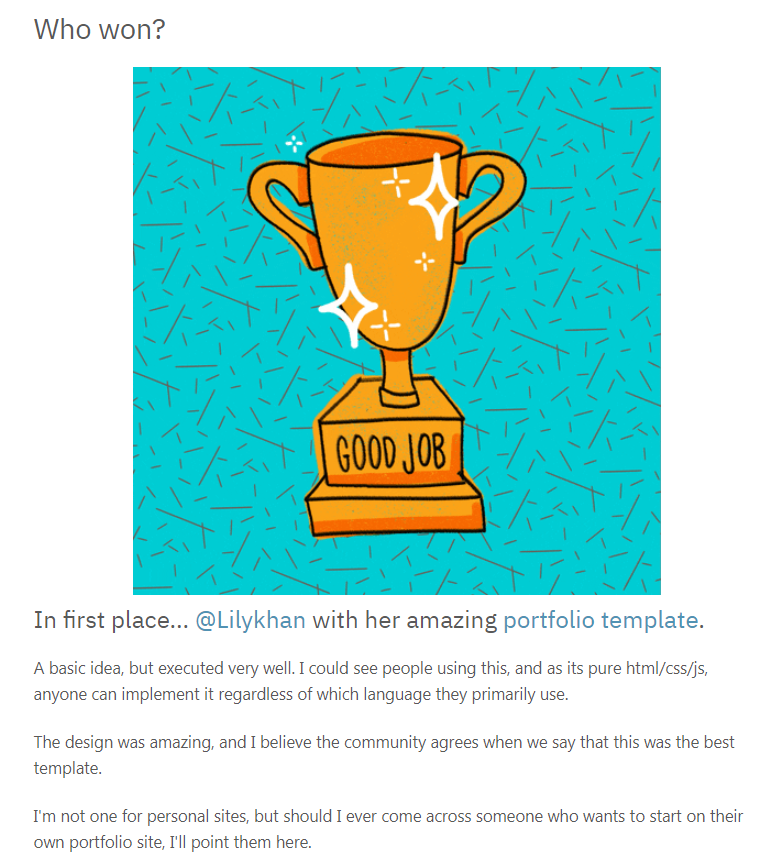 To me, being active on the replit discord, making new friends, learning more about both people and coding, along with winning codejams Is very cool.

Currently I'm working on the next Replit Jam - the LangJam We have to make our own programming language in it. I can’t give out much details, but our team’s name is "TheDevFam." Our team members are Kakashi, Edwin, LordPoseidon and I. I don't know if we will win or not but I know we won’t lose, working with each other in a team is an experience we will learn a lot from. I hope to learn a lot of new and cool things during this time. Between coding, school studies and other side projects it can be difficult to find time, but I believe that working hard to achieve what I want will be worth it.

During all this time in Repl.it server. I've met so many amazing developers and people like Edwin, Kakashi, H, Haziallat, Zavexeon, AllAwesome, Kognise, CodingCactus, Zwack, Minx, Mat, Bruhmley, Hithere, Cosmic Egg, AdCharity, Archie Maclean, IreTheKID, Mr Courtesy, Enigma and many more. Working with so many cool devs is a dream come true, I’ve had an awesome experience with everyone in the replit discord and would love to see you join too.

Thank you for reading, hope you have a nice day!


(Update) Hey! If you are interested in reading the next part then, here's the link.